We went shopping today. Ashleigh had a birthday gift to buy for her girlfriends one year old. Carly and I decided to tag along. Actually, I drove, they tagged along with me. ;o) We were headed to the Mall, but changed our minds and went to Kohls instead.

These two sisters have a ball whenever we go shopping. They were trying on scarves and hats in the girls department. I tried to take a picture (would have been really cute), but I couldn't operate Ashleigh's new cell phone. Oh, Ashleigh just informed me she found the video I took. So, I did capture that moment, just not in picture form!

We found our way over to the mens department and of course Carly spotted more hats. This time, Ashleigh gave me a quick lesson on the new phone and just how the heck to snap a still picture. 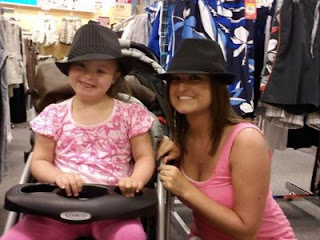 After Kohls, we went for lunch at the Cracker Barrel where Ash and I had very yummy salads. Carly had chicken tenders and cheesy hash brown casserole. A couple of years ago, Ashleigh worked at Cracker Barrel and was happy to see some of her old buds. She was a little surprised to see that some were still in fact working there and hadn't moved on. After talking to a few of them, we quickly learned, they can't find any other jobs.

Then we hit the grocery store. Ugh! I hate getting groceries. Hadn't been in over 2 weeks, yikes. The kids were all gripping that "we don't have anything here to eat"! Honestly, they were right. We ran out of milk yesterday. Oops!

Enjoy your weekend. It's rainy and about 55 degrees out. What the heck?! I thought this was summertime. Tomorrow isn't suppose to be much warmer. I don't think the weatherman is calling for rain though.
Posted by Unknown at 7:21 PM
Labels: bits and pieces, having fun

Hey, they look like Janet Jackson in those hats :)

What a cute pic of the girls!! I wish it were raining here. We just have dry and hot!!! I guess we all want what we don't have!!

Sounds like a girly girl day, except for the grocery shopping. Not my favorite either. I don't mind the shopping part, but then you have to carry it all in the house and put it away, YUK!