Carly always has a pencil, marker, crayon in her hand. I work with her often. Except that she does not like for me to watch her work. As a matter of fact, when it comes to writing her name, she flat out refuses to do so with me anywhere around.

The first time she wrote her name at home I didn't notice it right off the bat. I was in the kitchen, as I so often am! When she started hollering for me. She wanted me to see what she was writing on her pad of paper. She has several pads of paper ;o)

I went to see what she had done and at first failed to even see the HUGE accomplishment. Her name. I saw the X's and A and B right away. She acted really put out. Then I saw it. Her name. Holy Moly, I almost fainted. I did cry. No doubt Carly thought I was nuts! Then of course I made a huge deal over it. She was very, very proud of herself.

As you see, I snapped a picture. I wanted to email it to her kindergarten teacher. And to some family and friends...you know, to brag a bit! I just knew the teacher would be as excited as I was. So, I did just that. Emailed the picture to the teacher. The next day, the teacher emailed me back. Here are her words, "Oh Joany, Carly has been doing this for several weeks at school". Gosh darn it. I thought I was the first one to see her masterpiece. Not the case!

The date of the following masterpiece was 4/10/09. As you can see, Carly wrote her L upside down and had a bit of trouble with the Y, but anyone can clearly see, she wrote her name. 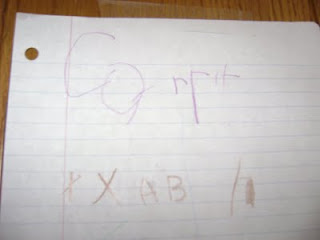 This next picture is much improved. It was written today, 8/3/09. Again, I was in the kitchen. Carly came out and asked for paper and a pencil. I gave her both and she went on her merry way.

Later in the day, we were cleaning up the mess she had made in the living room. I picked up the pad and almost fainted. She had found (Lord only knows where)a green crayola marker. Quite clearly, she wrote her name with it. I asked her, "Carly did you write your name today", her response was, "no, Paul" I said, "Carly daddy isn't home". She shrugged her shoulders, in true Carly fashion. She kept telling me no, Paul. So, I dropped it.

I then got to looking a bit closer at the paper she wrote on. I had jotted down some figures while paying bills. I noticed those figures were still on that very piece of paper where her name now appeared. She did write it today. The little stinker wouldn't own up. 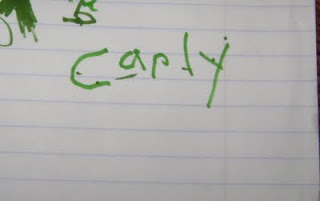 We are all beyond thrilled with how very much improved her name writing skill is. She never ceases to amaze us. She is, without a doubt, our littlest masterpiece.
Posted by Unknown at 11:10 PM
Labels: bits and pieces, education

Oh,my,gosh!! That is an absolute masterpiece!!So proud of that child of yours.

Oh, my! I would be lying to you if I said that I didn't well up with tears and have a lump in my throat the instant I saw what she had done. That's amazing! Way to go, Carly!

By the way, Carly was the name of my fictional kid when I was little...

Awesome job Carly! Her printing is very neat too!

What a major achievement - nice job!

That looks awesome! Don't you love when they surprise us?

My son, Max, wrote his name the 1st time on a name tag for a Gymboree. I was shocked. Me nor school had even been working on his name. I guess seeing it so much he just knew what to do. He was a little over 3 1/2 years old. Much younger then any of his 'typical' siblings!

oh Carly that is wonderful!! High 5's from Kayla :) I can't tell you how much I enjoyed this post...as I'm sure you've read before on my blog...handwriting is a struggle for Kayla right now. this gives me such hope that she will write independently one day!