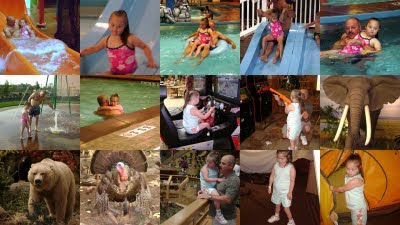 Click on photo to enlarge.
Yes we were missing in action over the weekend. No computer and only a few tweets went out! We were much too busy having fun!

Paul and I took Carly to Splash Universe and Cabela's over the weekend. We had a really good time. Except we realized, Carly really should have had a little brother or sister. Just to have a playmate. Anyway, we went Saturday and spent the night. On Sunday, we headed to Cabela's. It's right across the street from Splash Universe.

We played in the water for hours. We went swimming in the hotel pool. Which is in another building and was much quieter. We hit the huge game room. Carly LOVED playing games. She really wanted to play the Dance Moves game, but it was geared toward an older crowd. She tried though.

Finally at 10:30 we headed back to our room for showers and sleep. The room was a 1 bed room. Thankfully, it was a King size bed. It was nice to think we would have ample amount of room for sleeping...NOT! Carly is a bed hog. She was all over that bed. Her legs flip and twist all night long! She looks like a human pretzel. No kidding!

Sunday we got up early and headed to the continental breakfast the hotel offered. It was by far the best one we had ever seen. There were so many different selections. We ate then headed back to pack up our room. We had to check out at 11. However, we could still access the splash park up till 10pm. We opted (well Paul and Carly) to just go for a few hours and then change and head over to Cabela's. I honestly had had enough of the splash pad on Saturday. My foot has a heel spur and if I don't have my shoes on, it KILLS me! So, Sunday there was NO WAY I was going to go shoeless to the splash pad. Forget it!

No doubt, we will be taking her back some day. She couldn't get enough of it. Hopefully, my heel spur will be long gone by then!

Posted by Unknown at 10:16 AM
Labels: Fun stuff, having fun

How fun. I just found a new waterpark by us. We need to hurry and go before summer is over.

Looks like a ton of fun! She is just so cute!

Great pictures! What a fun weekend! Carly looks like she was having tons of fun!

That sounds fun. Last Summer we went to a water park at Wisconsin Dells for about a week. The kids LOVED it. glad Carly loved the water.

Thanks my friend.Your words made me cry but good tears in knowing we are surrounded by those who love u and are praying for Zoey.I am trying to keep the faith ...sometimes though,I just don't get it.Love to you.