As we returned from vacation, in Aug 2004, Carly's nose was very runny. Just clear, so I thought I'd give her a few days before heading off to the doctor. If I'm not mistaken, we returned home on a Monday. Late afternoon, early evening. Carly had a slight temp., nothing major. We treated her with Tylenol and she was doing okay.

Thursday of that week, I believe it was Aug 12., I decided to take her to the doctor. She was having a rough time sleeping at night and thru naps. Poor little girl. She had a double ear infection and a nasty viral bug. We got our meds and headed home for our 10 day treatment.

We continued on with our lives. And Carly had finally perked up. We spent time in the pool. Playing outside. Just having fun at the end of summer. We had treated her dbl ear infection for the 10 day course. She finished her last dose of meds on Aug 22. We ran Brad back and forth to the school for football practices. Took the big kids school clothes shopping. Got ready for Brad's first football game of the season which took place around the 28th or so. 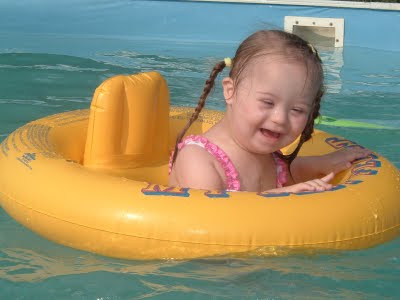 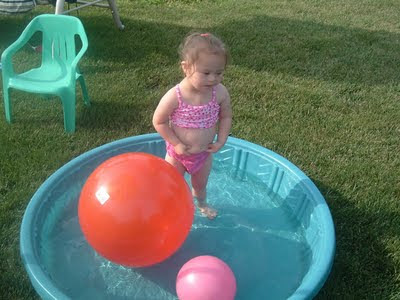 By the very end of August, Carly developed a strange rash. My mind instantly went toward heart issues. However, she would get that darn low grade temp on and off. So, back to the doctor we went. The doctor told me that there was a virus going around causing this very type of rash. It sometimes would take a couple of weeks to get through it. Okay. I bought that. He's the doctor. Who am I to question a particular virus that's running rampant through kids in the community.

Jumping into September. Labor Day weekend to be exact. I finally freaked myself out enough that I made a call to UofM Pediatric Cardiology. I reached the on call doc. I mentioned what was going on and told her that I was very worried this was something to do with her heart. This very kind doctor told me that it would have nothing to do with Carly's heart. Her heart was repaired and she was okay. I was told to email our Cardiologist ~ he was away for the long weekend ~ and run it past him, if I thought it would ease my mind. You all know, I did just that. He emailed me back very quickly. He said that his daughters had this very same virus along with the rash, but that he would take a look at her if it would make me feel better. I told him, no...I'm just a wreck of a mother who needs to learn to keep it under control.

The week after Labor Day, Ashleigh had Carly come to school for one of her classes. She had to demonstrate life with a toddler. Ashleigh chose doing Carly's hair. We got to the school and one of Ashleigh's friends met us in the parking lot. She was gushing over Carly and asking how she was feeling. I mentioned the virus and the rash to her. After looking Carly over and much to my surprise, she said "oh, my little cousin has that very same rash. He too has been sick". Okay, my mind wasn't racing quite as much after that conversation. 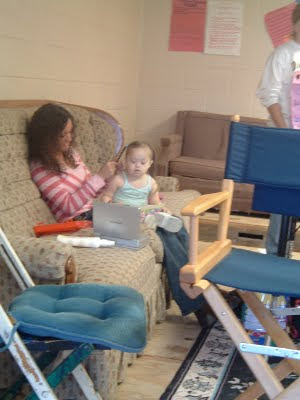 Again. We went ahead with life. Carly continued with the rash. On and off fevers. Back and forth to the doctor. Who was still convinced this was a nasty virus. He decided to place her on a course of steroids. She took them for 10 days..(I think)... I was pleasantly surprised to see the rash going away. Woo Whoo! Things were looking better. Wham! another ear infection. Back on meds for 10 days. This time. Carly started throwing up. Her fevers were coming more and more often. Going higher at night (like always) and then suddenly breaking into a cold sweat.

I tried my best to keep this little girl happy. We played...when she felt like it. But this was the best way to entertain her throughout this ordeal. 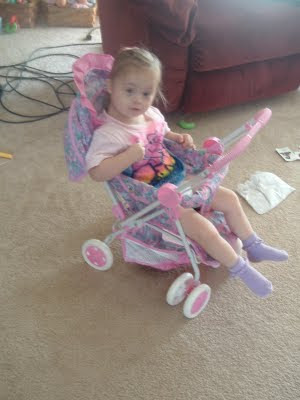 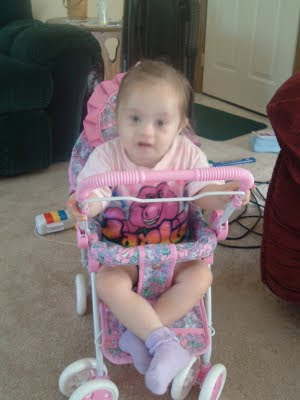 Yes, this is her doll's stroller. My tiny little 21lb 32 month old daughter fit quite nicely in it. Don't you think?

I pushed her through this house for hours on end. This would make her so happy. I actually got to the point where I'd have to push her around while walking on my knees. It just killed my back.

Stay tuned for the continuation of Looking Back 2004
Posted by Unknown at 9:00 AM
Labels: Carly, Looking Back

Poor Carly! You must have been so worried ... I'm looking forward to reading more.

Funny how we can relive the days and moments leading up to diagnosis.For you,5 years ago but in many ways I am sure,as you re-write those times,it feels like yesterday.Zoey and Carly seem similar in how they were feeling leading up to the "news".Zoey also had the come and go low grade fevers,the disposition that just was "off" by a bit and the rash.Our doctor thought the rash was a reaction to her shots she had just received and a virus she was fighting off.Seemed logical to me ,however my voice inside told me otherwise.Look how darn cute she was.It always strikes me with these kids,that despite what was happening in their bodies,they still looked as good as they did ...considering what was lurking.

So precious in the little doll stroller! Ready for more of the story :)

I don't like where this is going. I know Carly is OK now so I will continue to read, but I still get a sick feeling in my stomache.