It just doesn't seem possible. I can not believe that twenty years ago today, I was holding our brand new baby boy in my arms. This was our very first 'family photo'. Family of 4! Not sure, but I'm willing to bet that Ashleigh (who never, ever stopped talking, still hasn't) made a comment about her new baby brother..that's likely why Paul and I are looking at her. Being this took place 20 years ago, I just can't remember what exactly was taking place during this snapshot! Brad was our largest baby. He weighed in whopping 8lb 8.8oz and was 22" long. Poor baby had to be delivered via the vacuum extractor. Yes. It was as scary as it sounds. It's a suction device that is placed on the baby's head. Mom pushes, the extractor suctions the baby out.

Within 24 hours we learned, due to the vacuum extractor, our baby had a very badly broken collar bone. Poor little guy. He was in sooo much pain. I know many doctors claim newborns don't' feel pain. I beg to differ. And personally, those doctors have no business being doctors! But, that's just my opinion. Anyway, this little guy felt the pain. It was gut wrenching. Funny as this sounds, I was very thankful it was his collar bone that was broken. I read an article in Parents Magazine very shortly after his birth. The article was all about the dangers involved with using vacuum extractors. My heart sank as I began to read the article. I learned that many babies were dying due to broken necks after this type of delivery. So yes, I was thankful our baby had a broken collar bone.

Looking at our new baby, we couldn't imagine how he would be as he grew up. We wondered about his personality. Who he would look like. Who he would act like, behavior wise...of course, on bad days, he's his dad's son 100%. LOL! His looks, well those come from his dad too. Matter of fact, all of our kids look like their dad. :o)

Here we are 20 years later. Brad has grown into a nice young man. He has had his share of hard times in these 20 years. Hard times that a person of 20 years should not have ever had to endure. At least not so much, so soon, in such a short span. But, I believe that is called, life. Sometimes life goes along just hunky dory. Other times, not so much. 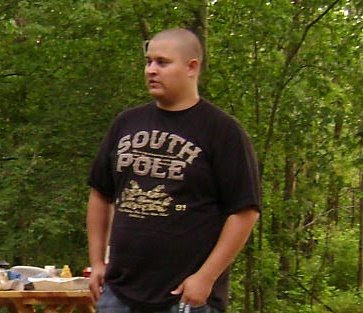 Brad still suffers with depression. Still is having a hard time finding his way in life. Certainly not what we had envisioned 20 years ago, for our new baby boy. All that being said. Brad has never given us any grief. He was a decent student all through school. Could have been much better (seriously, what mom doesn't say that?) if he had actually opened up a book to study, but he pulled off C's and passed each grade and graduated. High school is now behind him. His future is uncertain. That breaks my heart. He appears to be somewhat lost. Unsure which direction he needs to go. He lacks confidence in himself. Something that took place when he was hit with a severe case of Mono his senior year of high school. That was his breaking point. That's when depression took over his life. Some days, Brad does super. Other days, are awful.

Today, it's your 20th Birthday. Happy Birthday to you! May this year be the start of a whole new beginning.

Posted by Unknown at 9:56 AM
Labels: Brad, Looking Back

Happy Birthday Brad! I pray you have a great year!

When I delivered Caleb they used a vacuum extractor. I had no idea the complications that could arise from that. I'm very thankful that all Caleb suffered from was a bruise on his head.

I hope Brad has a great year this year.

Here's to Brad, God Bless you today, and in the year to come may you find peace and joy! Happy Birthday!!!!

Firstly a very very happy birthday to Brad. I really hope that this is going to be the beginning of better days for him. Wishing him peace and happiness.
Secondly I just read your last post, don't know how I missed it. Gosh there's so much going on for you right now, I really feel bad. I do hope things get sorted out in your favour. I hope your mom is doing better as well as your Aunt's niece. Prayers for Carly's oncology and cardiology appointments, hope everything is under control and there's nothing but good news.