Puts a smile on my face. 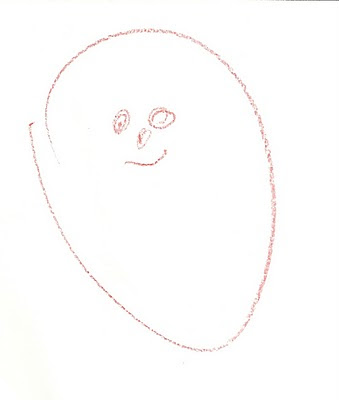 I believe Carly has mastered yet another task. Small task to some. HUGE for Carly!

Carly has been able to draw shapes for quite a few years now.

However, her smiley faces were simply a circle, with a bunch of dots in the
center.

She did this on her own. With no prompting from me.

She called for me to come see what she had drawn.

And I all but fainted on the floor.

I made a BIG deal over it and embarrassed her terribly.

Until I suggested she draw one for sissy too.

And draw she did. In fact, she drew four smiley faces in a row.

One for sissy, mama and grandma and one for Paul (as she calls her dad)!

I tried to convince her to write her name on each picture, but no such luck.

Needless to say, Carly and her smiley faces, put a smile on my face.

Posted by Unknown at 11:37 AM
Labels: Carly, Important events

That made my day and made me smile as well. Way to go Carly!!!

That's such a fabulous smiley face!!! Congratulations, Carly! I love how proud children get of their accomplishments. And how proud it makes us feel as their parents!

That is the cutest smiley face! I love it.

Yeah Carly what a wonderful job, and like Heather says it really does represent more than just a smiley face.

Is there a more perfect smiley face?! Love it!

Great job Carly! This put a much needed smile on my face too! :)