I've been absent from my blog for several days. Only because we've been enjoying time with family. And having fun over the long weekend.

We went to a parade on the 4th then to a chicken BBQ put on by the fireman. We've enjoyed bonfires, s'mores and fireworks too. 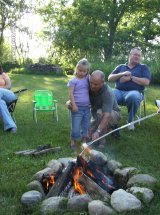 Carly for the first time ever, did sparklers. She had a blast! She even enjoyed the spectacular fireworks display that my brothers put on for us. Normally, Carly is scared to death of fireworks, but this year she actually did enjoy them. 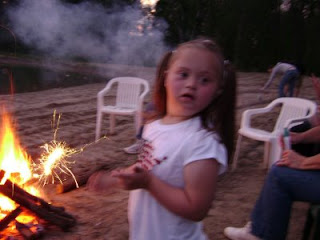 She has a sparkler in this picture, but it's hard to see due to the bonfire in the background.

Brad had a mishap while doing some kind of firecracker. It was a colorful one, none like I have seen before. You were suppose to light them and then toss them. Well, we figure this particular one was defective. Brad lit it, but before he could toss it, it went off in his hand. It ended up ripping the tip of his index finger open. He is OK, but was in quite a bit of pain after it happened. Kind of put a damper on the rest of the night for him. We are just thankful it was just his finger. We all know it could have been much worse. Finally, you meet Brad, our 19 year old son. 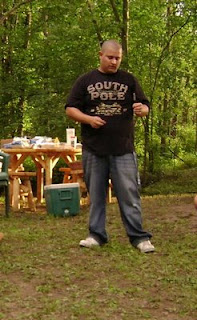 Carly and daddy went canoeing down my brothers river. Very shallow river I might add. They got stuck more often than they were able to paddle down river! 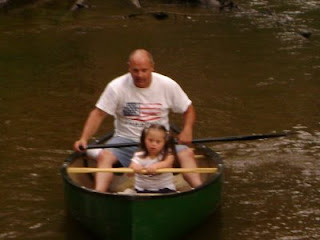 On July 5, Paul, Carly and myself, along with my oldest brother, and his family, who were visiting from IL., headed to the Detroit Zoo. It was a great day to be at the zoo. Sunny, warm and breezy. Carly like the Giraffes the best. She and daddy even got to feed one! 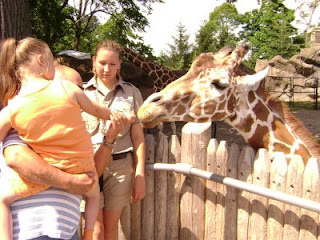 The only thing missing was Ashleigh. Carly has missed her terribly. Although, Ashleigh is having a great time in California. Little stinker has been out yachting with some friends. Walking the Hollywood Walk of Fame. She sent me a text pic of Christopher Reeves star. That was cool! And, she of course has been laying on the beach. She is due back home late tonight. Carly is very excited!

Hope you all enjoyed your 4th of July weekend as much as we did.
Posted by Unknown at 10:43 AM
Labels: Fun stuff

Cute photos. Love the canoe. Scary about the fireworks going off in the hand. Yikes. Nice blog, we'll be back.

Sounds like a great week end, except the firecracker mishap. Glad he is ok! Carly looks SUPER!

thanks for the info on Carly's blood counts. It really helps to talk to people that have been there. How long has Carly been off treatment?