Aren't these pretty? I love fall colors. The leaves. The flowers. Likely it's my most favorite time of the year. Especially this year. We've had warmer than normal temp's around these parts for the entire fall season. Except the weather man says it's all about to change. ;o(

Paul did some errands on Saturday morning. When he returned home, he had brought with him, these beautiful flowers. Paul and I don't really do the flower thing. Neither of us have ever felt that spending money on flowers for each Hallmark Holiday, made much sense. However, I must admit, that once in a blue moon, it's a nice surprise. 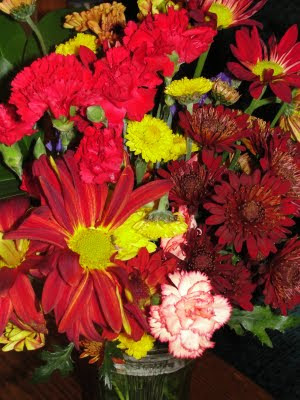 Aren't these the brightest most vibrant colors? When I asked Paul what the reason was for the flowers. He said, "you've had a rough couple of weeks with the school and I thought flowers would perk you up". He was right. A big bouquet of fall colored flowers was just what the doctor ordered!
Posted by Unknown at 7:39 AM
Labels: bits and pieces, Paul

What a nice thing to do for you! Those flowers are gorgeous!

Lucky girl to get flowers! I pretty much have to have a baby to get any. But that's OUT of the question Ha Ha Ha.

My name is Sarah said...

Beautiful. I could use those right now since its snowing like crazy here!

Oh they are beautiful. You deserve them. That was such a nice suprise. Hope you have a better week ahead. Hugs.