Going through pictures yesterday, I ran across this one. My heart about melted when I saw it. It's a picture of Carly, one week old. When Paul came home from work, I pulled it out to show him. I asked him if this wasn't the most precious 1 wk old he'd ever seen. His response was, "Yeah, Ashleigh was cute" He argued with me for a few minutes. He was Insisting it was Ashleigh. Until I finally pulled the picture out of the frame to show him, the proof written on the back ~ Carly 1 week old. 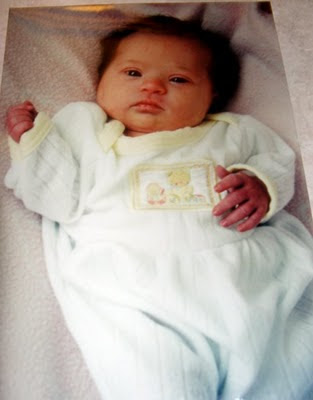 Carly was born weighing 5lb 11oz. She came home weighing 5lbs. 6oz. She was 18" in length. Just a tiny little thing. Preemie outfits were worn until she was 3 months old. As you can see...they tended to be a little big on her! We had a nurse at Cardiology suggest that we buy her doll clothes. She said she knew of several people who did that. We never did though!
Posted by Unknown at 7:45 PM
Labels: Carly, Looking Back

ah she was tiny!! and how funny your hubby thought it was Ashleigh!

What a beautiful baby she was and is!

What a beautiful baby, really precious, still is!

Oh look at that precious baby! You can totally tell its Carly!