9 years ago today, at 5:30am, our family headed to Mott Children's Hospital in Ann Arbor. Carly would be heading into her first open heart surgery at 7:30am.

I recall that day as if it were yesterday.

Once we arrived, vitals were checked. The dreaded "talk" with anesthesiology took place, for what seemed like forever. Those of you who have had your child put to sleep several times, knows full well just how that "talk" goes. The talk when they tell you your child could die during this surgery. They tell you all the bad things that can go terribly wrong. Mom's cry. Grandma's cry. Dad's cry. But the staff is comforting and caring.

We were surround by our family that morning. As we sat in the waiting room. Waiting to hand our tiny little 8 1/2lb 3month old, over to the surgeon. The surgeon who only gave Carly less than a 10% chance to survive the surgery itself.

Our name was finally called. My entire family headed down the longest corridor that I've personally ever walked down, in my entire life. I held my tiny baby girl while tears streamed down my face. While walking, we met Dr Ohye, (Carly's cardiac surgeon) in the hallway, and he stopped to chat with us for just a bit. Told us to "hold on" and that he'd take very good care of our baby.

We were then placed into a room, which was right outside of the operating room. We were all kissing Carly and telling her how much we loved her. And we were praying, that we'd see her again. Soon. Alive. But none of us knew for sure if that would be the case.

As I handed my tiny little girl over to the anesthesiologist and his nurse, my knees buckled. Paul and my mom each had hold of my arms, thankfully, because I'm sure I would have hit that floor hard!

Our family was then escorted to the family waiting room. Which is located just outside the PICU. We were told that there would be a couple of updates. The first update came, telling us things were underway; surgery had started. Another update came about couple hours later, telling us things were looking good. Shortly after, we received a horrible update. The surgeons nurse told us, "Dr. Ohye isn't sure he has enough of Carly's tissue to work with and he may have to take down the surgery." We were devastated. We knew what "take down the surgery" meant. It meant, he'd undo what he had done up to that point and close her up. Death would soon follow. As we sat, waiting for yet another update..we were all on edge. We were numb. Scared to death. And there were many tears and lots of prayers. When out of the the corner of my eye, I see Dr. Ohye literally bouncing down the hallway and grinning from ear to ear. I knew at that very moment, he had done it. He had fixed that tiny heart. That tiny heart that so many of Mott's cardiac team didn't think possible. I jumped from my chair as these words came out of his mouth, "I had enough tissue and her valve is working beautify" I grabbed him and hugged him so tight. - I was told later, that I was the only parent to ever hug him before - and it made his day :)

We were also told that Carly was not out of the woods. She had a long hard road ahead of her and she needed to get through the next 48 hours without any issues.

13 hours after Carly's surgery, she coded/crashed. Diagnosis - pulmonary hemorrhage. Paul and I stood and watched as doctors and nurses surrounded her tiny body. Working and screaming orders back and forth. We were quickly escorted into a consult room. We were told to contact family and asked if we would like the Hospital Chaplain to be called in. We said yes. The time was around 2am. We sat in that room for a little while. Unsure of how long we actually stayed in that room. Finally, the ICU doc came in. She said, and I quote (there are some things mothers NEVER forget) "we are going to lose Carly very shortly unless we get consent to place her on ECMO" Paul and I had no idea what ECMO was. The doc explained to us the best she could, but trust me, when you are in that critical situation,,,you don't hear a whole lot of what is being said to you. And there really wasn't time to go into detail. We told that doctor that we didn't want Carly to die. We signed the consent and she flew out of that consult room screaming, "mom and dad don't want her to die, get ECMO started".

Our family showed up very, very early that morning. I think they were there by 5am. Honestly can't remember. I just know they were all there. Early. Even Ashleigh and Brad, who were 15 and 12yrs old at the time.

Several hours later, we were able to see Carly. And this is what we saw: 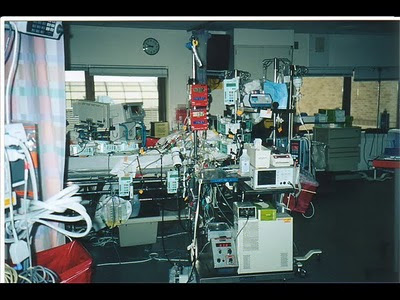 She's laying there, behind all those machines. Trust me, she is there..even if you can't see her little body. Talk about being terrified. I'm not even sure that describes what we felt walking in and seeing this MONSTER machine being used to keep our baby alive.

April 5. Yet another day, that will be etched into my brain for the rest. of. my. life.
Posted by Unknown at 4:47 PM
Labels: Carly, Carly's health issues, Finding our way, Looking Back

perhaps making a memorial on http://www.findagrave.com/index.html would help? It sounds morbid but is comforting!

Your memories are heartbreaking. Our daughter has not yet had a heart surgery, but one is in the near future and I am terrified. She has however, had other surgeries and procedures and the "monster" you referred to above is one we know of as well.

The scary stuff us parents have to endure with our children. Definitely changes your life forever!

It seems like the most normal thing in the world that parents who have *already* traveled to Hell and back with their tiny child would be destroyed to have her die the way Carly died.

It is just not fair. All of that. She survived ALL OF THAT (and YOU WITH HER) - and then she was taken when you least expected it.

I am so sorry, Joany. You are right to think it is not fair.

Joany, I am so grateful for that ECMO machine. Without it, I wouldn't be alive myself. I was on it for 3 weeks at age 32, and it saved my life so I could be here for my kids. I think it's amazing that it gave Carly alot more time to be loved by her wonderful parents. You and Paul give me great inspiration. U of M is the world's best hospital if you ask me, and Carly was loved by the staff dearly, I can tell that from your posts :) Unfortunately, some children do not get to enjoy a full and prosperous life, which is a horrible thing. And agonizing for the parents for the rest of their lives, which is a complete understatement. I could never begin to imagine your pain, and honestly I hope I never have to. But, you were and are great parents...Not only to Carly, but to Ashleigh and Brad too. I'm grateful that you've been able to experience the intense love of all 3. That surely is a blessing. She lives on through you. If you ever need an ear, I'd be happy to listen. Hugs xxxx -Krista