***EDITED*** not sure what is up with blogger and Picasa, but they aren't jiving anymore. Well, at least they aren't working for me. So...I've re-added the pic that was suppose to have been on this post when I hit "publish post" this morning.. Hopefully this one shows up.


the second word that Carly ever said was, "Purple" as she pointed to the flowers on my Hosta plants.

Last year, Paul rototilled my daisy garden...which had pretty much been taken over by violets. I was so sick of the violets! No matter what you do, you can not get rid of them! We would pull some out, but they just multiplied. Which would have been fine, had they been growing elsewhere. But, I made the BIG mistake of planting a couple of clumps that my mom gave me, in my garden which was FULL of daisies. Learned my lesson the hard way. The violets over took my entire daisy garden.

Yesterday, as Paul came walking in from work, he hollered for me to come look at something. I found him standing in the spot that he rototilled last fall. The spot that is nothing more than yucky, bare, dirt.

And this is what we found.. 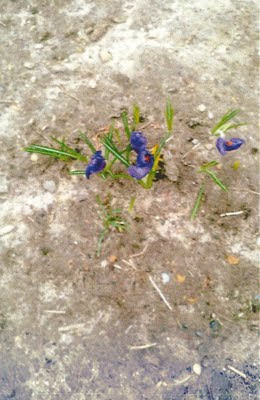 Purple flowers.
Purple flowers that we did not plant. I promise you...I did NOT plant anything in the old daisy garden. The entire thing was rototilled about 3 times in the fall. It was nothing more than over turned dirt, once winter hit. But somehow, these flowers popped up this Spring. Could this be Carly, shining through once again? Click here and see the last signs that could only have been our girl shining through. At least, that's what we think. If you click on the above link, take notice of the purple flower in that collage of pictures. That morning glory plant was given to me by my mom..yes, she gives me lots of plants! Mom's morning glory plants were all pink. As you can see for yourselves, my morning glory-which was part of hers, bloomed PURPLE! Strange? Coincidence? Or Carly?

As I said above, Carly's second word that she ever said was PURPLE! The first color of a flower that she identified verbally. One of her two most favorite colors..the other being red!

Six days before our nightmare began. Before we lost the sweetest little girl ever. Carly had wanted new shoes. So, we headed to the mall. We first stopped for dinner at The Outback, where Carly ate all of Paul's shrimp. The girl loved her some shrimp! Then we hit the mall. Once we got to the mall, we asked her what color of shoes she wanted. Guess what she said??? Yep, she said, "Purple"! We looked high and low for purple shoes that night. We found nothing. Carly was not so happy. BUT, she eventually spotted a pair of white tennis shoes that had pink and grey stripes on them and those were the one's she picked. Those barely worn shoes, were buried with her.

A few weeks after we lost Carly, Ashleigh took me with her, to one of our Outlet Malls. She needed some running shoes and she didn't want to go alone..or she figured I needed to get out and about. You might know, I found a pair of purple Nike tennis shoes in Carly's size that day. I almost bought them. And so many times since, I wish I would have, so that I could have given my girl, the purple shoes that she wanted so badly.

~~~~~~~~~~~~
** yesterdays post was kind of upsetting to me. For some reason my pic's wouldn't stay put. They were there one minute and then some disappeared later.. I hope this picture comes through okay**
Posted by Unknown at 11:03 AM
Labels: Finding our way

I have no doubt that Miss Carly is once again reminding you she is still here with you. I wonder if the pictures disappearing is her way of playing tricks on you. I don't think I will ever see a pair of purple shoes again without thinking of her. Hugs!!

I see the flowers now. They were not there this morning. I still think Carly is having a giggle over all of this.

I love that! What a sweet post! I am sure carly is very close to you and watching over you!

I remember the morning glory story!! So funny I was thinking about that post just yesterday.And now more purple flowers! She's always close to you Joanie.

The subtle signs of your sweet girl.Reminding you that she is with you always and forever.

I loved all the pictures of Ashleigh and Carly.Made me smile.Made me sad.Made me miss her all the more for you all.

Thinking of you and praying for you all,as you make your way through the rest of this month.

Wow that is amazing! I think your little sweetie wants you to know she's still with you :)

i remembered your story about the purple (not pink) morning glories and now purple flowers in your rototilled daisy garden - with nothing else but bare dirt... i definitely think carly is giving you little signs to show she is still with you! pretty amazing!

Oh dear, sweet, precious Carly ... continuing to find ways to show you she's still around, in her own way. What beautiful purple flowers in the midst of all that brown dirt! PS... purple is my favorite color :)