...July 4, 2009 was the last 4th of July we had with both Brad and Carly. We had such a good time that year. With the exception of Brad nearly blowing off his finger while setting off bottle rockets :/  Ashleigh wasn't with us that year, she was with friends, on vacation in California.  But, July 4, 2009 was the first, and sadly the last year that Carly used Sparklers. She was in awe of them. :)

So, as we go about our day today, our hearts will remain heavy. Missing both of those kids more than I could ever attempt to explain to anyone. Wishing more than anything we could do Sparklers with our sweet girl again this year and each year after. Wishing Brad was here, he'd be in his glory this year, now that Fireworks are legal in Michigan.

We will be heading to my brother and sister inlaws house (where we were in 2009) today and having fireworks there as well. It's going to be tough, I'm sure, but we will be surrounded by family, who will, I'm sure, be feeling our losses as well. And we'll be missing Ashleigh too. But, our hearts rest easy knowing she is happy with life aboard the USS Eisenhower. They are docked in Palma, Spain for the next several days. Boy, is she one excited Sailor! 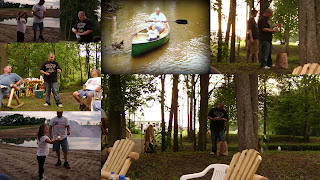 Enjoy your July 4th 2012. Be safe. And always remember, Treasure Each Moment, make lots and LOTS of memories...one never knows what tomorrow may bring.

I've been MIA for quite some time in bloggy land. Haven't known what to say. Even tho., I have a lot to be said. But, sometimes it's best just to keep things quiet. At this point, I'm really unsure as to how much I will blog throughout the summer months.

I've been having MUCH anxiety the past several weeks due to health issues, the new house, Ashleigh being deployed, Brad's death investigation, missing Brad, missing Carly. Taking criticism from strangers online who send me private messages and emails telling me how I'm so venomous. Seriously? I reply one time, but they blast me over and over and over. It's pretty sick if you ask me. But, whatever, I've learned that people are nasty, mean and cold hearted and some day, they'll get what's coming to them.

During the days, I'm trying to keep myself busy. Even if it means just jumping in the car and going to the store. Some days, I just have to get out of the house and away from the house. I work out in my garden quite a bit. Work in the house, trying to get it decorated in hopes of making this house feel like our home. Not a ton of success in making it feel like "home" but I'm trying.

Paul and I were talking the other day. I am so incredibly lost in life right now. I've been a stay at home mom for 14yrs. When we lost Carly, so suddenly, I was devastated..however, I did have Ashleigh and Brad home. And because of them being home, I forced myself to push forward. Then, Ashleigh left for the Navy. Brad was still home. I was pretty thankful to have him here. He kept me in check, mom wise that is. Now, I have nothing. No kids at home. And truthfully, I have no idea what I am suppose to do. Could I get a job? Probably. Not sure I could mentally handle the stress of a job right now. But, for 14yrs, my job was, "mom" and in less than 18months...my job, as I knew it, ended.

I think I'd like to get back into counseling. Even tho., I wasn't all that impressed when I was going before, but I'm so lost. And my health issues have me a nervous wreck. I now have a colo rectal doctor and I wont get into those details, but I'd be lying if I said I had no concerns. I also had biopsies done in May, checking for uterine cancer. No cancer, but some kind of growth in my uterus. My GYN is extremely hesitant on doing a hysterectomy. She said, "you need to have one, but..." Yeah, that BUT..is making me crazy. She told me she could go in and remove the growth, patch up my uterus and I could have more children. (expect Paul would need a reversal vasectomy). I'm so torn over this decision. REcently, I've had dreams about having more kids. In fact, one dream I had, I had twin girls..and I was PISSED off in my dream, because I wanted a boy, JUST like Brad and a girl, JUST like Carly.  But, I know that in reality, I am almost 46yrs old, my monthly cycle is HORRIBLE and this growth needs to get out of me. I go in to meet with the GYN the end of July. I do plan to schedule a hysterectomy, but boy it has been on up and down decision process. And I'm still not 100% with doing it.  Ugh..it's never freaking ending.

Paul is, well...he's surviving the best way he knows how. He has some pretty rough days. He worries about me while he's working. And he's been having some pretty bad anxiety issues too. His work has been crazy busy. He's been averaging 75-80hrs a week. Hopefully, that is about to slow down. While he's home, he tries to busy himself around the house..we have a TON to finish up, but it'll get done, some where down the road.

Ashleigh seems to be doing really well. She deployed on the USS Eisenhower on June 20th. The ship is deployed for 9months. Her orders are only for 3months..but we all know that could change at any given time. We are able to email back and forth and we even got a phone call from the ship!! It was a pretty rough connection, but we could at least hear her voice. :) It sure made Paul and I feel so good. And knowing that life on the ship isn't bad (except the bathrooms are nasty - (she's a bathroom clean freak!) and the food "sucks"..except for the cheesecake and cobblers, she's having a good time! They are about to go into Port for a few days. Not sure if I can share that info or not. I think once they get to port, then I can! But, she is looking forward to it and she is VERY excited!

Guess that's about it for today. I'll try to be better at blogging and not be MIA for so long!