Poor Carly. She has been fighting strep throat since Dec 17. On the 17th we began, Round 1 of strep throat. Carly was put on Omnicef for 10 days. She finished up that med. Acted fine. We made it through Christmas. Whew!

Along comes the 28th. Carly woke me up several times in the night complaining that her tongue and throat hurt. She wanted to go to the doctor at 4:30 in the morning! As a matter of fact, she was asking for a shot! I did get a flashlight out to look in her throat. I saw a very bright red throat, but no streaks or spots. Off we go, on the 29th, back to the doctor. Round 2, strep was back. Doc placed her on another antibiotic ~ Zithromax for 5 days.

This picture was taken on January 1. Click to enlarge and you will see just what her throat looked like while taking, Zithromax. 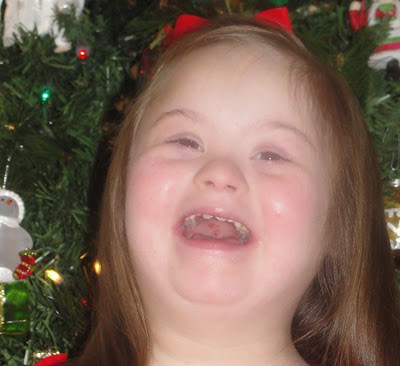 This picture is one of many that I was in the process of editing on Jan the 2nd. I notice something in this picture that didn't look quite right. I zoomed in. Way in. That's when I realized she had spots in her throat. Again. I nearly had a heart attack. She was acting absolutely fine.

Sunday Jan 3rd. Carly started complaining again of a sore throat. What the heck?! Jan 4th, back to the doctor we go. He was stumped. Leave it to Carly to stump all of her doctors. I found out that for some people, strep is very difficult to get rid of. Soooooo... Round 3 is here. Carly was placed back on antibiotics for 10 days. Doc put her back on Omnicef. His thoughts were, "she likely didn't get quite over it the first time around." He also said, " Zithromax did her no good whatsoever!" Ya, think?

What does all of this mean??? It means that this poor little girl hasn't even been back to school yet. I looked in her mouth last night and decided that she needed to stay home from school again today (Thursday). Her spots are nearly gone now, but she had some bright red streaks. No way am I sending her off to school. I know she is no longer contagious. How could she be? She's been on antibiotics since Dec 17th. (with the exception of a couple days between meds). I just don't like the thought of sending her off to school when she still isn't 100% Carly.

What else does it mean??? Well, it also means that her blood work will likely look like crap when we head to Ann Arbor on the 21st. Dagnabbit. Although, on a lighter note. I have not seen ANY bruises on this kid in almost 3 weeks!! She even bumped her knee yesterday while climbing on the counter. She bumped it really hard. So hard she cried her poor little eyes out. I just knew I'd find a nasty looking bruise within a couple of hours. NOTHING. NADA. ZIP!! Hopefully that means her platelets are UP and closer to normal. I know I shouldn't get my hopes up, but hey. I would really LOVE to kick off the year with some normal looking platelets! Even though I know that the likeliness of that happening isn't so likely. Especially since she's been sick since mid December. Oh well. A mom can dream. Right?
Posted by Unknown at 10:42 PM
Labels: Carly, health issues

I CANNOT believe that picture!!!Poor girl.Hoping she feels better super quick and that she has made a nice turn around when labs are due.Zoey was sick the last time as well and we all know that that doesn't make for accurate numbers ... hate that.

I have been living in a dream world with Ella as well. She has seemed bruise free for the last couple of weeks and I am hoping that means her platelets are up. Last draw they were 37,000 so maybe they will be better next week when we go. Carly doesn't have to go in for a couple of weeks so hopefully that will be enough time for her body to recover...and if her numbers are off, well then you know there is a good reason for it. Hope this round of antibiotics works. By the way, I know her throat looks bad in the picture, but I think she looks beautiful!!

I hope the strep is gone this time, once and for all!!!! I also am saying a prayer that her bloodwork will be wonderful when you go to Ann Arbor in a couple of weeks!!!! Will you have a chance to eat some Cottage Inn pizza while you are there? (My aunt and uncle and two cousins live in Ann Arbor and whenever we go to visit we always eat at Cottage Inn Pizza!) :)

Does Carly still have her tonsils? Although I hear that doesn't stop strep throat. Hopefully it will go away for good this time!

I like the comment about tonsils. Our daughter constantly had a green nose--NEVER was dry! Her speech therapist suggested removal of tonsils. Saw a specialist and he agreed. Now we only get the occasional green sinus infections-seasonal. What a difference. Not to mention a great improvement with her speech. She is now almost 22 and most people can't believe what great speech she has. We too started out with signing. What about antibiotics for a full 30 days? I'll keep Carly in my prayers. She's a beautiful little girl.

Oh no! Almost a month of strep?! Poor kiddo - I hope round 3 takes care of it once and for all!

Ugh, welcome to my world! Poor thing ... hope she kicks it soon!

Gals
You have got to see this. Obama playing on XBox. Funniest video ever. http://bit.ly/bllhx1

Hi Guys,Just registered here and looking to have a great time. I am looking for the best cash gifting program out there in the internet. Can you guide me?

Reserve the barbarian with two backs casinos? adieu to this advanced [url=http://www.realcazinoz.com]casino[/url] commander and wing it lessen online casino games like slots, blackjack, roulette, baccarat and more at www.realcazinoz.com .
you can also into our blooming [url=http://freecasinogames2010.webs.com]casino[/url] conk at http://freecasinogames2010.webs.com and na‹ve admonition protrusive trifle !
another boaster [url=http://www.ttittancasino.com]casino spiele[/url] place is www.ttittancasino.com , as an selection of german gamblers, be repaid unrestrained online casino bonus.

I love abandcsmom.blogspot.com! Here I always find a lot of helpful information for myself. Thanks you for your work.
Webmaster of http://loveepicentre.com and http://movieszone.eu
Best regards