...with a bit of fright!
The following picture has not been altered in any way.
We did not photograph a jack-o-lantern.
We used no props whatsoever. 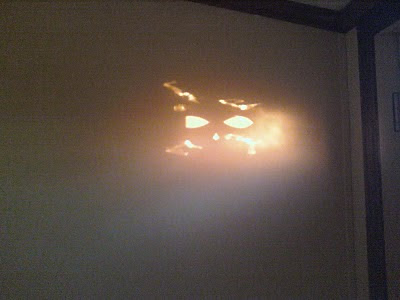 Around 6:25pm, October 31 2010,
I was sitting on the couch in our living room.
Paul was in the recliner and Brad on the love seat.
I caught a glimpse of this image on our living room wall.
And yes, this image has us all a bit freaked out.

Now, if you can't see the image looks like
a jack-o-lantern...maybe you'd better
get some glasses on and look again.

Because I have my cell phone attached to my hip
today...(I had the ringer off yesterday and missed
several calls...oops).
I quickly grabbed it and snapped this picture.
Then I went to find my camera.
I snapped another pic with my camera, but
the image had started to fade.

Of course I went on to send text
messages with this picture
attached to my family. Just to get their response.
My phone rang almost instantly.
My brother wanted to know
"what the hell did you do to get that picture?"
We did nothing!

This image lasted on our living room
wall for about 20 minutes.
It then faded away.
Never have we ever had anything like this appear.
And can't figure how how or why it
appeared tonight.
We don't even have one single Halloween
decoration out this year. No candles going,
NOTHING!

What do you think of our Halloween 2010?

Posted by Unknown at 7:42 PM
Labels: Finding our way, hmmmm

i think it was a sign from Carly. I truly believe in signs from the other side. It is comforting to know that she might of wanted to be present to you somehow.

Did you have a jack-0-lantern on the front porch that maybe the sun was reflecting off of?

Cindy,
We had NO Halloween decorations. No jack-o-lanterns, pumpkin, gourds, NOTHING. The only thing Halloween we have in our house, is candy corn!

I think Carly was wondering where your jack o lantern was, she couldn't find it so she brought her own.

I agree with Kristen's mom. Carly knew you were thinking of her and the memories you have from last Halloween. I think it's a way for her to say hello mama...I'm still with you.

I think Carly knew how much you would be missing her over Halloween, just wait till Christmas, she is around and wants to make sure you know it. Feel comforted and safe knowing she is with you. I love the pictures from last year, little Miss Pussycat, she really looked purrr-fect!

oh my gosh, That gave me CHILLS.

We believe that on Halloween , All Hallows Eve, the veil between Heaven and earth is almost gone. It's a night that we are all together. Hallow means Holy. Nothing pagan about it, (although they did have there beliefs) the Catholic religion and other Christians believe it is a very holy time. Leading into All Saints day, which is today and All Souls day which is tomorrow. That is why we celebrate. And in light of your recent posts on pumpkin carving and missing Carly, i do believe she was just having some Halloween fun with you. She's close to you Joany. God is allowing her to visit and comfort you. He loves you J and so does Carly. They want you to feel comfort. I'm sure of it. That picture is amazing! And even if it can be explained, just the fact that it showed up on the inside of you wall is a miracle of sorts.

This is seriously giving me chills. Wow.

what can I say? WOW!

Hi, Joany!
I found your blog through Sarah & Joyce. Your family is beautiful. Thank you so much for sharing your story! I love this Jack o lantern post! Carly was wondering where the Halloween decorations were this year.. thought she would help you out!

oh WOW Joany i literally have the chills. maybe little Carly thought ya'll should put up some decorations. im a true believer in spirits. i think this is awesome!

Wow! When I first glanced at it (and yes I saw the jack o latern right away) I thought it was the sun coming through some clouds. Is there a window opposite the wall where it could have been a weird play with the sun and shadows? Either way - wow! I think Carly had a hand in this!

Wow, i just did my makeup and I literally have tears! I saw the jack o lantern right away and so believe she is with you!