Our tears continue to fall. At any given moment we can get on a crying jag. It really doesn't take much.

We were due to get new cell phones. Actually, we were way past due. So, on Saturday Paul and I headed to a nearby town to visit a Verizon Wireless store. We found the cells we wanted. The sales man was great in assisting us. Probably the very first time that I could even say that about a Verizon Wireless employee! I had considered ordering our new cells online, but really wanted to get an up close view of the phone I had been looking at. We ended up going with a Droid 2. I got a white one. Paul got the black one. 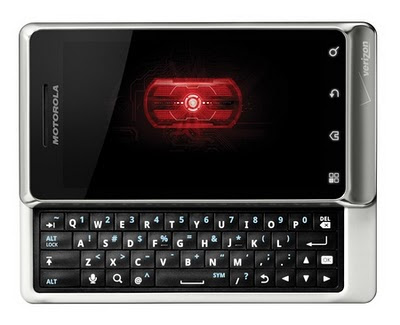 In all honesty, it's way too much for Paul to tackle. HA! I think one of the kids will probably end up with his. But, couldn't beat the deal. Buy one get one free and over $200 mail in rebates..which will hit the mail box tomorrow morning! Making the total cost about $50!!

BUT...we had tons of pics on our old cell phones. We wanted them. Most of which were of Carly. We had close to 400 pics between both of our old cells. I had told the salesman that I wanted all pic's transferred over. He then went on to tell us that he had to charge us $20 per phone for up to 100 or some pic's and then an additional fee of (he had to check on it) X amount of $'s for the rest of the pics. Oh, and $10 per phone for all contacts to transfer. When he found out how many pic's we had to transfer, he nearly fell on his face. He then wanted to know if we had a problem with him seeing the pics as they transferred. We told him, "no." And we went on to tell him who was in most of these pic's.

We stood and talked to this guy for quite a while about Carly. And of course our tears started flowing. Right there in the very busy bustle of the Verizon Wireless store. We got ourselves pulled together as the salesman went to do his thing with our transfers. He got one phone transferred and brought it out to show us. The tears were flowing once again. Seeing all those pics of Carly with that wonderful, silly little smile on her face. I couldn't stop. I stood there with tears streaming down my face. And I seriously could not stop. The poor salesman just kept telling us how sorry he was for our loss.

Meanwhile, the manager had been lurking around, no doubt wondering why the heck these two crazy people were standing at the counter in Verizon's store with tears running uncontrollably down their faces. When all had been transferred, the salesman came back and told us, "all transfers are on the house today." I tried to pay for them, I told him I didn't care how much they cost, I would pay. But, he wouldn't take money for any of it.

Oddly enough, as we stood talking to this salesman, he told us that he had a friend that had a 7 year old daughter literally dropped over in the back yard while outside playing with her cousin last year. Cardiac arrest. Just like Carly. Although, this other little girl's parents knew that this could happen. And we were told this would not happen. The other girl didn't have an entire heart. She had been born with HPLS and was not expected to even live beyond the age of 2. But, without any warning, just like Carly, this little girl dropped over in her back yard while playing. No symptoms. No warning signs. Nothing. Just. Like. Carly.

After we left Verizon, we had some running around to do before heading home. We had to get a watch, that I bought for Paul for Christmas, re-sized. We made a stop at Kay Jewelers in the Mall. The lady wanted to know why I didn't come buy the watch from her in person. She was very friendly and just kidding around with us. And of course she told us that she would have given us a really good deal...(I beg to differ!). Paul told her that we did a majority of our Christmas shopping online this year. Of course she didn't just take that as an answer. So, Paul went on to tell her just why we did so much online shopping. That we had lost our 8 year old in April and no one was up to much Christmas shopping other than online. We talked a little about the how's and whys and what's...even tho we still don't even really understand. The sales lady then went on to tell us about her 6 year old son. He had been born with a heart murmur. But, it was so faint that he never had an echo done (which really bothers me that a doctor would let a murmur go for six years). At one of his recent well child visits, the doc suggested they get it checked out. The murmur had become much louder than it had been in the past. And so, this little boy was diagnosed with a heart defect at the age of 6. They now face the unknown with their 6 year old. Because other than a heart murmur, shows no issues whatsoever!

We finally headed home around dinner time. Brad had asked us to bring him a sub. So, we pulled into a Subway shop on our way home. As we walked in, we both noticed a lady sitting at a booth with a young man who had Down syndrome. Whenever we see a child/adult with Down syndrome, we are drawn to them. As I placed the order, Paul headed over to their booth. He had his new phone out, with a picture of Carly, ready to show these two people. As it turned out. This lady was the young man's mother. And I kind of figured that. His name was Andrew. He was 26yrs old. And greeted us with a "hey man, what's up?" We stood and talked to him and his mom for about 15 minutes or so. He made us smile. Made us laugh. And he waved to us none stop as we pulled out of the parking lot.

Our Saturday was full of tears, cell phones and a couple of chance encounters.
Posted by Unknown at 10:00 AM
Labels: Finding our way

I cried and got chills reading this one!

That makes me cry, too. I am so glad you were able to get your pictures moved to your new phones. Is there any way they can be transferred to a cd to have as another way to keep them, too?
Hugs and love to you and Paul. What an interesting day you had!

it's amazing how people connect and how many other people are suffering but you wouldn't know it unless you ask. what a better place this would be if people were more open like those you met. i had/have a heart murmur and i've never been told it was an issue. i think it may be something to get checked out now.

wow great stories, wish you didnt have to tell them and had your carly instead but that was so kind of the man at the phone store...glad you got them. Can you get them printed out to put in albums?

Not a Perfect Mom said...

I know how precious those photos were...I'm glad that you got them!! ((HUGS))

This post gave me tons of God sprinkles (goose bumps). What encounters you had!

I never thought I would say something great about Verizon:) But what a good thing they did. A great chance encounter indeed!

When we lost our son three years ago, we too wanted to transfer what little pictures we had of him when we bought our new phones (he was a teenager that was too tough for pictures and would put up his hand or turn his head when cameras came out). We treasure the ones we have and were able to send them to our e-mail address to get them in a more permanent spot ( I was too worried that my 7 year old with down syndrome would accidentally delete them when he played with my phone). I'm sending you my love--I've thought of you quite a bit these last months of "firsts"-- all the holidays back to back can be a little daunting. I won't say the pain goes away--but I think it's not as raw as time goes by-- I think we all still very much have a deep, abiding sorrow that probably never leaves. There are words I've learned the meaning of that I always thought I "knew" until I really did know: bittersweet and heartache to name a few. The silver lining ( I'm not saying this makes up for the grief and sorrow) of this whole terrible ordeal of losing your child is finding the true compassion that others so willingly offer-- there truly are angels among us that are our neighbors, friends, and family. I hope that you will continue to find ways to memorialize Carly and keep her memory alive and active--remembering all the wonderful things and happy times with her. She continues to be your daughter and an important member of your family.

WOW! What an emotional day for you! I am so happy to hear that there are still people out there who care, and who give back to others! I could just hug that manager!

I'm also happy that you and your husband were shown some kindness that day, and although it was a day filled with tears, you were able to talk about Carly and share her with others. Love and Big Hugs!!!

Wow - what a day for you--very emotional and ended on such a great note..and all of those stories...you were meant to be there at that time...
I sit here at my desk wiping my tears away ..knowing its nothing like what you go through every day..but I think of you often..and love reading your blog..xx from Cali

All these encounters, chances to talk about Carly and bring her along even on a Saturday outing, must feel like gauze over your wound...it still stings but perhaps very instrumental in healing and soothing too.

Keeping your mourning in my prayers - thanks for continuing to share it.

WONDERFUL to read of the chance encounters that put a little glimmer in your hearts...

just a thought/suggestion... I don't know if those phones take memory cards, but if they do PLEASE invest in a couple for your phones and put your photos on the mini SD memory cards, and save them out of the phone. So should you ever lose your phone, you will not lose your cherished memories! PLEASE!!!