..is another gloomy day around our house. Full of much sadness and anger. Yes, we are still angry and we'll likely be for quite some time to come. As for the sadness, I'm quite certain it will never leave us.

11 months ago, Carly first asked for "Paul"after she got out of bed, but he was still sleeping (he'd worked the night shift and was still in bed at 8am) and I told Carly that he would be up later to play with her.

We headed to the rocker/recliner, where Carly climbed up into my lap and fell back to sleep. She slept for 2 whole hours. She slept peacefully. With no signs or indications that trouble was brewing. As I rocked her, I did as I always did, I soaked up the scent of my daughter. And I'm so glad that I did that day too. I never wanted to forget her scent. You may think that's odd, but I did that with her all the time. 11 months ago was no different.

After napping those two hours, while sprawled out on top of me, (I'm short and she was growing-holding her like that was getting more difficult for me and for her, but we managed) Carly woke up. Nothing seemed out of the ordinary. Although I was a little surprised that she got out of bed at 8 and then went back to sleep till 10, Carly was a non stop kind of kid. She was up early and hit the floor running. Every. Single. Day. In fact, I had a twinge of " beware...sleep. Too much of it may mean cancer looming back" - a sign we had to watch for with that stupid cancer. And yes, I was/am a paranoid mom. But never in a million years did I think she was in cardiac distress.

The very last words that came out of Carly's mouth, were "more pink milk" aka, strawberry yogurt drink. I gave her one and she chugged down. Then asked me for "more" I gave her another one and she chugged that one too. I then headed to the kitchen to get her med's ready. She was on the tail end of a course of antibiotics. As I approached her with her med's she was still rocking in the chair, she sat up on her knees and screeched at me "NOOOOOOOOOO" and pushed me away. The tone of her voice, was one that I had never before heard come out of her mouth. At that point I told her we'd just wait till after her bath.

Leaving her sitting in the recliner, I turned to head to the bathroom, that's when I heard the thump. As I turned around I saw her going from sitting up on the floor, (remember, when I walked away from her, she was sitting IN the recliner) facing the recliner, but slumped in front of it, to falling over on the floor in a fetal position. I wasn't more than 10ft from her. As I ran over to her, I could see her lips were blue and her color was very gray. I started screaming for Paul. He and Brad both came running. I guess my tone scared the shit out of both of them. Paul started CPR and I was on the phone with 911. Brad was pacing the floor, completely freaked out.

Paul had revived Carly. Which we have recently learned, was an all out miracle in itself. Did you know that only 4% of people in a health crisis/emergency, who need medical intervention, actually survive with only having CPR being preformed? We did lose her on our living room floor, that's per her cardiologist..but her "Paul" brought her back. Sadly, we all know that in the end, she needed much more medical intervention than could be provided for her on that day. Which pretty much sucks because she didn't have what she needed in her time of crisis.

The following pictures were taken last March. She came home from school and ran straight to her swing set. I remember this day so well. Carly insisted on sitting in this particular swing, even tho she could swing in a "big girl" swing...for some reason she wanted to swing on this one. 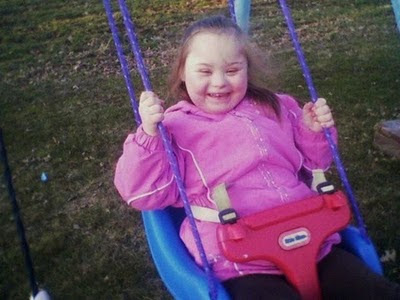 And did she ever have a blast! 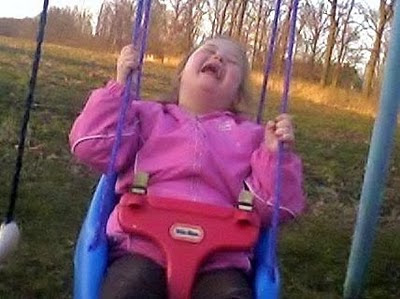 As you can probably tell, due to the very poor quality, these pic's were taken with my cell phone. I wish I would have had my camera out that day, but didn't really expect to be playing outside in mid March!

As we mark off yet another month without our sweet little girl, we head straight, smack dab into our 12th month. April. One year. Unbelievable. We fear the month of April. We fear the 23rd of April. And we fear that we will soon be starting our 2nd year without our sweet, sweet little girl. How can time pass so fast? I want it to slow down. I don't want to be facing a second year. I don't want to face another year without my baby girl. I'm still having a hard time trying to navigate through my days without her now. How will I ever get through each passing year? I don't want to be doing this anymore.

Okay, I'm done with this post. I can't even see the screen through my tears.
Posted by Unknown at 9:00 AM
Labels: Finding our way

Hugs for you. We pray for you guys all the time.
Our son's bday the day before Carly died, so each time I look at him I think of you guys. I want you to know that we haven't forgotten your sweet girl or your family.

I always cry with you. I hurt so bad for you and Paul.

I remember the day vividly.I read your first update on FB that she had turned blue and then the next read,that she was gone.I remember finding your phone number,texting you and then calling Ella's mom because I didn't know who else to call.In shock then and sometimes,even today,finding it hard to grasp that your sweet girl is not there with you all.

Sending love and prayers of strength,to you all, as April approaches.Wishing there were something,anything,we all could do to help you carry this unbearable load Joany.knowing,in the end,there is not.

Joany, I pray for you everyday. I cry with you as I read the hurt and immense pain in your words. No one should have to endure the loss of a child. It makes me angry and so sad that you have to live this life without your precious baby girl.
Amy

You gave her such a good life ~ her smiles are across her whole face.

Can't see the screen either. Joany I've been thinking about the 23rd too. I remember exactly what I did that day. We were at the park, we laughed and took pictures and Andrew fell in the water. I came home and posted about it, then I noticed all the posts about Carly. I deleted my post immediately, and instead put up one about Carly. I never re-posted my original post, and the pictures from that day always remind me of Carly.
We'll all be with you on the 23rd.

Sending you prayers for strength. <3

I cannot fathom your pain. My 6yr old son has Ds and he's here on earth with me tonight. He calls his Dad "Hom"(his way of saying Tom).Last month our friends lost their 23 yr old son very suddenly. He had Down syndrome too. They loved him so, like all parents love their children. I visit your blog every now and then. I don't blame you for being angry and sad-11 months without her has to be agonizing.

I feel like I am on a downard slide as we approach this one year marking of the day our lives changed forever. I sit here, reading this and crying, remembering getting that call at lunch and going back to work and praying that the next call would be telling me that the crisis was over, which is the call I didn't get. I don't know how I drove home from work...how I drove with the kids to Michigan. I don't know how I managed to shop for Travis for dress clothes, but I remember feeling like I did everything wrong, when none of us were in our right minds for days..everything an absolute blur. I know how hard it is to not hear Brittany's voice everyday, and she's just a few states over...so I can only imagine the pain you feel every single day. Love you guys so much and you are in my thoughts and prayers each and every single day

11 months too many without your little girl, have been thinking of April myself and although one knows the day is going to come I wish there would be a way to make it pass in a less painful day.

Always sending you love and prayers of strength, we are all here for you, on the 23rd and any day other day as well. You and your family are in my heart.

Even though they are cell phone pictures you can still see the joy radiating out of Carly being on the swing! My heart still aches for you not to have your Carly with you; and I know that is nothing compared to the ache and emptiness you feel. You're always in my thoughts and prayers.

Crying along with you and continuing to pray for your comfort and peace.

My heart hurts for you.

Love those pictures. You can see the pure joy on Carly's face.

i don't know how you were even able to see at all as you wrote that post - i have tears in my eyes just reading it! still thinking about you guys TONS!!!

BIG GIANT HUGS! I'm crying along with you.