Wow...25yrs is a long time! Although, looking back now...time flew.

I first met Paul in middle school...that was reeeeeeeeeaaaaaaaaaaaalllllllllllyyyyyyyyyy a long time ago! In fact-we rode the same school bus, which meant we lived very close to each other. We were friends all the way through middle school and high school, but we didn't start dating until 1984.

Looking back on that day, we could have never imagined what life had in store for us. I think more often than not, people walk into marriage with blinders on. Suddenly, we had two children. Before we turned 25. Man, that's so young. But, as quickly as we married, had kids and started our lives..we ended it-with divorce.

We separated in 1991 and our divorce was final in 1992. We went our separate ways..well,sort of. Oddly enough, we fought worse divorced than we did while we were married. But, eventually, one day..we grew up. The fights were fewer and further between. We actually started being able to carry on conversations with each other.

In the mean time, our 2 small children entered grade school. Like any child, the kids wanted both their parents around for after school activities. And so, we started spending time together. Like a family. The four of us. At that point, we decided that we needed to try this whole marriage thing again. So..Paul moved in with the kids and I, in 1997. We lived together for two years before getting re-married, in December of 1999.

Fast forward to 2002. We completed our family with a very unexpected gift. Carly. We had talked about having another baby before I became pregnant with her, but at that point...we had pretty much forgotten all about it. We were busy with Ashleigh and Brad and all their after school activities. We were on the go. All the time!

Once Carly was born, we had no idea how we ever had gotten through life without her, always being a part of it. She was our third child, but somehow, she was our center. Our core. Even though she battled her way through the first 4 years of her life with more health issues than most of us will ever battle in our entire life time..SHE, kept US, grounded.

We walked straight through the gates of HELL with Carly. Two open heart surgeries..one of which almost claimed her life. 3 major and potentially fatal blood infections. One of those blood infections caused her brain to swell. Which in turn, left her left side in a palsy type state for many, many, many months. And caused neurosurgeons at UofM to sit on the edge of their seats, waiting, nervously to open our 3yr olds head up to relieve pressure off her brain. Thankfully, that did not happen. However, during that time, an old stroke(I say old, because it was calcified)was found on Carly's brain. At some point in her life, she had had a stroke. A stroke that would likely have gone undetected, had it not been for that one, really nasty blood infection. During all that stuff, leukemia hit in 2004, which took us by surprise. 26th agonizing months of chemotherapy. Dehydration from chemo, which left Carly with NO vitals, whatsoever. Hospitalized for burns from chemo. Burns on her little bottom. Yes..BURNS from CHEMO. Her burns were not from her skin coming into contact with any of her chemo drugs(those will burn the skin), but rather from her bowel movements. Those burns were so bad, she was placed on a morphine drip and Mott's called the burn team in to access her. She had 3rd degree burns on her entire bottom...all from chemo drugs. Every time she went potty...she was in such pain, she would stop breathing. Talk about a horrifying experience. That one had me a frazzled mess!

All the above experiences could never have been guessed 25yrs ago, when Paul and I first said, "I do" We never, in our wildest dreams thought we'd end up divorced..or re-married. Nor could we have guessed that we'd be running through corridors at Mott's Childrens Hospital, toward ICU because our daughter was dying. Not once, not twice, not three times...many times. We were so naive to think that life would be all rose colored glasses. It took us 24yrs to realize just how awfully hard life can be. Especially after all those horrifying experiences with Carly and the here and now.

When we first got married, we were just like everyone else. We'd be together forever. We'd have a happy family with plenty of money and a nice home. We'd live happily ever after. We'd have healthy, happy kids. You know, all that normal naive stuff?! Paul and I learned quickly, that that is not the case. Life hits and it hits hard sometimes. 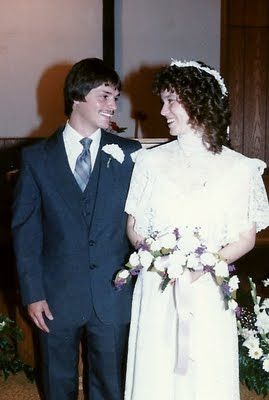 We've been through so much together. It has not been easy. Not by a long shot. And I fear it's going to get harder as we go forward without our little girl. Our 25(plus)yrs together does put things into perspective..that's for sure. I can hardly type the following...but here it goes. I can't imagine life without Paul being by my side. You might wonder why that would be so hard to type..or even think. The reason being..is fear. Fearful of what may happen...just like with Carly. We couldn't imagine life without her. We were so happy. We were in a good place. Now, here we are. Finding out just what life is like without the very core of our family.

It's hard for Paul and I to wrap your brain around this stuff. For all the good given to us, came way more bad. And that makes us so terribly sad. Although, we are thankful for the 8yrs we had with Carly...8yrs is just NOT enough time. Nowhere near enough time.

I don't expect we'll do much celebrating today. To tell you the truth, we don't even know which anniversary date to even use!! HA! This one, or the second one!?!? All that matters is that we weather the storms, together.

Happy 25th Anniversary Paul, like I always told Carly..."I love you, bunches of O's!" (Carly liked the Honey Bunches of Oats cereal commercial..except she said "O's" instead of Oats. Therefore, I always used that phrase with her..and she would giggle like crazy)
XOXO!
Posted by Unknown at 10:41 PM
Labels: Finding our way

Carly was blessed to have such wonderful, loving parents. Good luck to you and Paul in the future.

This was a truly beautiful post, Joany. Happy, happy anniversary to you and Paul! That's quite a milestone to hit.

Happy Anniversary!! And many more to come!

Happy 25th! You've got one heck of a story about yours and Pauls relationship. I love it! You divorced but realized how much you really did love each other!

sweet wedding photo of you two and great post too

Mommy to those Special Ks said...

Happy Anniversary!! Praying you have another 25 years together!

We love HBO's as we call the cereal in this house and now,I won't buy them or pour them without thinking of your sweet Carly.

I of course knew your entire story of life,love and especially loss,but seeing it in print,hits home,once again to me,the gift of perspective while going through out daily deeds.The never taking for granted to people and the moments of our lives.Not for a second.

It was my honor to spend the day with you and Paul and I saw the love the two of you have for each other,so very clearly and although I saw the pain of missing your girl as well,I saw a love of a husband and wife that will endure through this unspeakable time of sadness.

My name is Sarah said...