We've been dealing with quite a bit of crap lately, which sucks more than anyone could imagine. We are missing Ashleigh. We are grieving Carly and we are grieving Brad. Except,,,our grieving seems to have been put on hold. And that worries me.

On a bright note,,,which we have very few of these days....17 days left until we are able to hug Ashleigh (our oldest) again. On Nov., 18th, Ashleigh will be graduating from the Navy. Yes, we are counting down each second of every day. Paul and I, along with my parents will be there to see her graduation ceremony take place.

As far as how Ashleigh is doing, she's doing o.k. As o.k as she can be doing. She is worried about Paul and I. She told me that she thinks of Brad and Carly constantly. And, not knowing what went on that horrific night is making her crazy. She wants to know, as do we. She needs to know, as do we. But the truth is, this is still an open, ongoing investigation. We know very little. What we do know is that our only son died on October 8, 2011. We know the cause of death (some would be surprised), but we do not have explanations as to other things that had gone on within our home on that night. Things I will not share with you. Things I can not share with you. I suppose I could blab what we do know to the whole freaking world, but we were told, by the Michigan State Police, not to reveal to others, certain parts of this investigation and so, we will not.

The gossip, speculation and assumptions are still swirling all about. Which is so disgusting to us. What people "think" happened, is way off base. We aren't sure how such talk gets started..or why. Those who are talking about our son and his horrific death, sicken us. And yes, we do know of several people who are doing such talking. How dare anyone speak so ill of a 21yr old who lost his life in such a horrific manner. Obvious to us, that small town talk stems from people with big mouths who have no lives of their own. Not to mention, all this ignorant talk, hurts our family very deeply. Hurts me, Paul, Ashleigh, my parents and my brothers along with their families. We knew Brad. Those who are talking..did NOT!

Today, we have another restoration crew over at our home. They are removing what is left of any of our furniture, appliances..etc...It's a tough process for me to be involved in. It's very difficult to go into, what remains of our home. Knowing our son lost his life there. It is an indescribable feeling. Seeing the evidence that remains a mystery to the police, is gut wrenching.

This week we will be meeting with our insurance adjuster again. The cost to repair our home is escalating to a crazy amount. Our hopes are to demo what remains of our home. Replacing/rebuilding with a new one.

I don't think anyone can understand how our heads are spinning. How dealing with a fire and homeowners insurance, takes away from the grieving process. We fear that one day, in the future, grief is going to swallow us alive. I've learned, from losing Carly..grief needs to be dealt with head on. Our grieving for Brad, has had to take a back burner. Not saying it doesn't hit us. It does. All of a sudden, with no warning. But, it's not the same. We aren't able to "deal" with the grief right now. Sadly, the homeowners stuff will not wait for us to weed thru our grief. Thankfully, Paul and I have my dad and my brother who have both stepped in to help deal with the insurance end of this nightmare. There is no way Paul and I could deal with it on our own.

As the days continue to pass, I just keep finding myself wondering, how does a family of 5 become a family of 4? And then, just short of 18months, a family of 4 becomes a family of 3. I'm telling you, we are living a god dam nightmare. 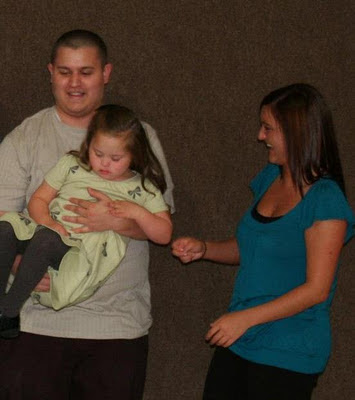 Our 3 kids.
Brad, Carly and Ashleigh, Oct., 2008.
Brad and Ash were cracking up..
Carly, not so much. She thought
her "bubba" was going to drop her.
He would never have dropped her!
Posted by Unknown at 11:04 AM
Labels: Finding our way

I still continue to pray for your family daily, Joany. My heart hurts FOR you and it's so sad to me that you are forced to deal with nasty small town rumors on top of the pain you are already trying to deal with.
There just aren't words. At all.

I cry for you this morning. My heart breaks for you. How can this happen, how? I can't even begin to imagine what you are going through, I think thats why I am in tears this morning. I am fighting to get my son what he needs to survive, and you are going through your house, trying to find anything you can save. Two children gone. I was going to say what you did. People have so much extra time to spend gossiping, I bet they have their own crap they should be concentrating on, and I'm sorry that people can be so cruel.
Its not fair, its just not fair! Just know that I think about you constantly. Love you Joany!

It seems that all I can do these days, is send love across the miles and prayers of peace and strength for the days ahead.

I'm sorry you have to deal with gossip at such a difficult time.

Thank you for the update. I think about you everyday and will continue to keep your family in my prayers.

My thoughts and prayers are with your family. I hope you and Mark can stay strong for your sweet Ashley; she has to be trauma struck and worried.

I don't understand why people are talking badly....you just lost your son! Still praying for you. I'm so sorry.

People are so cruel, you lost your son and your home on the same day. No matter the cause of death you lost your son. They need to not focus on gossiping about something they know NOTHING about and focus on ways to help your family with the things needed. They need to stop and think for a moment what they would feel if they had been through the HELL that you have been through in less than 24 months. Shame on them. While people are curious to how all this horrible stuff happened (which is natural) they DON'T have to be like that. The fact that you are dealing with all that has happened and now having do hear gossip erks me. I am praying for your family. I am down in Texas so I can't do much from here but pray.

Thinking of you SO much always. Sending so much love your way!