Fall has arrived. Winter is nearing. Along with that, comes the dreaded cleaning of the medicine cabinets. Out with the old cough meds., cold tablets, expired Tylenol, etc..In with the new. And yes, I said cabinets. I have 2. One over my stove and one in the main bathroom. Reason being, we have tons of medication in this house. Something I wish we didn't have the need for. But thankful for the meds without a doubt.

I can not even begin to describe, what I felt when I found this bottle at the very back of the medicine cabinet. In all honesty, I knew that I had saved this bottle all those years back. Guess I saved it for a reminder. Strange as that may seem. A bitter sweet reminder.
(click on any image to enlarge) 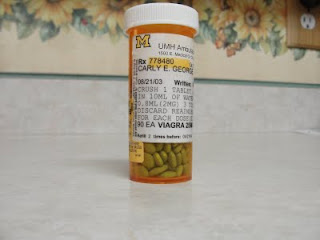 The following images were taken on Carly's second day of being placed on ECMO. This picture was the only picture we could get up close. I believe the nurse took this one for us. You see that little yellow duck? That was with Carly throughout her 30 day ordeal. She loved that duck. She always sucked on the bill (before surgery that is). The nurses made sure it was near her face every day. These pictures are very difficult for me to look at. In fact, I didn't look at them for many, many months after bringing Carly home from that hospital stay. 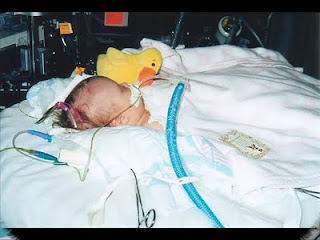 Carly was in grave danger. She actually did flat line and had to be brought back. Per my words, "I don't want her to die". I recall hearing the doc in charge of the ICU that night hollering, "get ECMO going, mom doesn't want her to die". Those words will NEVER be erased from my memory.This machine is very intimidating. Overwhelming may describe it better. ECMO is big. It's scary. It's dangerous. It was also our only option. Carly would have died if not for this machine. If you look closely, Carly is in the bed that is surrounded by all this machinery. I think if you click on these pictures, you'll be able to see her tiny little head with dark hair. 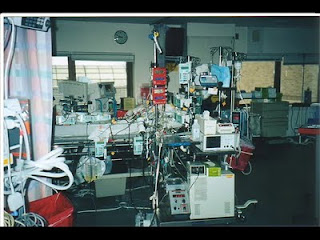 This picture even shows Ducky too. You really can't tell by all the pictures, but at one point during Carly's 3 1/2 days on ECMO, my brother came in and counted all of the tubes and wires going into Carly's tiny little, barely 9 pound body. The total....21! 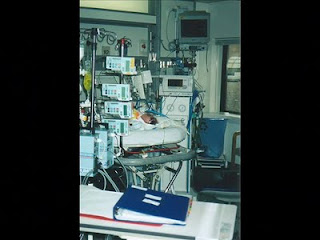 Here's a better shot of her head. I would pull a stool up to the end of the bed. I would sing Carly lullabies and kiss her forehead. Hours and hours would pass. I was thankful. So thankful that we had this chance for Carly. I prayed. Prayed that she would suffer none of the ramifications that can coincide with ECMO. There are so, so many. 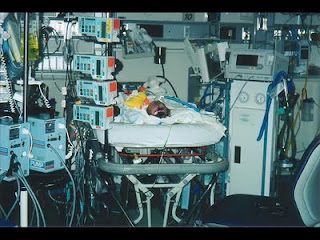 We couldn't get anywhere near the rest of her body. Only her sweet little head. I was so grateful for that. Not sure who decided to place her head at the end, but I'm so thankful to who ever did this. No doubt, it had nothing to do with them thinking of me...I'm sure it had to do with the best possible set up for Carly and that great big machine. 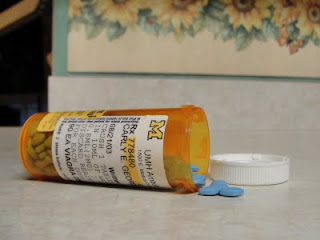 I'm very thankful for this drug. It no doubt played a huge roll in saving Carly's life after having her first heart surgery. Carly wasn't started on Viagra immediately following her surgery in April '02. The reason it was ever even started on Carly, was due to her crashing/coding 13 hours after surgery. Caused by a pulmonary hemorrhage.

This drug was brought on board after ECMO was unhooked. It was being used to expand the vessels in Carly's lungs. The vessels that were so badly damaged during her hemorrhage. Carly would remain on Viagra for over a year. She was s l o w l y weaned off from it. As you see, if you click on the pic of the medicine bottle, she was on a teeny tiny dose, but it was 4X per day. I had to mix it up for her. I would dissolve the pill into a prescribe amount of water. Mix it up. Pull the exact amount needed for her dose into the syringe, give it to her immediately and then toss the remaining mixture. They would not allow it for future use because they had no data backing up whether or not it would still be "potent" and able to do what it was intended to do.

These little blue pills were very costly. I'm so thankful that we had insurance that covered it. Even though the cardiologist had to fight with the insurance company every 3 months to get the bill paid. The cost for 1 month worth of Viagra (using 4 pills per day) $1,000.00 and some odd cents. That was back in 2003...can't even imagine what the cost is today.

As far as the ECMO goes. Carly came off of it without having any real big issues. There can be many complications going on and coming off of ECMO. The only thing that was a complication for Carly was that she got addicted to very high levels of numerous pain medications. She actually went through terrible, terrible withdraws. So terrible that she would thrash in her bed (of course several of the nurses thought it was all because of Down syndrome. Idiots!) and all her dark hair came out. She came home bald.

Fast forward, March 2005. Carly was in Motts Hospital with a blood infection. During her chemo time. This is when her left side went limp on us. A CAT scan was ordered to view her brain. What they found shocked all of us. Yes, Carly did in fact have a stroke. Years ago as we would eventually find out. Nothing pertaining to the limpness at that time. Her brain did swell from that blood infection. The swelling did cause damage. The damage being in the spot that controls her left arm/hand. It was merely a coincidence that they found that old stroke. Our Neurosurgeon strongly suspected this was a direct result of ECMO.

So, as I go about my day today. I will remain thankful. Thankful for Viagra. Thankful for ECMO. Thankful that God, ultimately healed our daughter. Yes, the machines and drugs played a huge roll, but very few of her ICU docs thought Carly would survive this entire heart ordeal. One doctor in particular..I remember him to this very day. He was NOT one of my favorite docs. He was full of gloom and doom. Anyway, as Carly was wheeled out of ICU on her way to the main heart floor...this doc stopped me. He said, "This is a miracle." He then looked at me and asked, "do you understand what I'm saying?" I said, "yes". He came back with this response, "We didn't do this, Carly was healed by a much Higher Up".

Ahh.....healed, yes she was. For that, I am forever thankful.
Posted by Unknown at 11:00 AM
Labels: Carly, Carly's health issues, Looking Back, Thankful Thursday

Wow, that brought tears to my eyes after reading what that doc said. It seems more powerful when it comes from the "doom and gloom" docs, doesn't it? We had some of those with our daughter Ainsley when she was first born and almost didn't make it. So glad Carly is healed and you have so much to be thankful for!!

Wow...I don't think I realized how sick Carly had been when she was little. Gave me chills what you said about what the doctor said to you. I am so thankful that things are good now!!

Wow, what a story. That must've changed that doctors heart on a very profound level as well. Thank you for sharing. So glad she was healed!

My goodness! I have tears reading her story. What a little fighter! I am so glad she is healed! God is so good and she is a miracle! Thank you for sharing!

ECMO is very scary! My little guy was almost placed on it a year ago. Thankfully he didn't have to be. I can relate to the addiction to the high doses of pain meds. My little Jayden was too! And he has been on sidenafil (liquid viagra) for a year. He is off now. We would get it mixed and compounded at the pharmacy. Last time I looked it was costing around $1800 a month, which we had to fight to have our insurance company pay for too. The wonder of drugs and modern medicine! I'm glad you had a miracle! That's what we call our experience too. We had 3 different docs. tell us that Jayden wouldn't survive or come off the vent. Sorry to ramble on! I know you don't know me, but I've been reading your blog for a while. And thanks for posting the info. on the H1N1. It is scary and I've been debating that one too. But I have to do all I can to keep my little guy healthy, so we will probably get it.

I learned so much from this post! Addy was on Viagara too but hers was liquid and neither one of her insurances would pay for it but it was only $55 per month!

Your story really touched me as well...What a scary time that must of been... What an amazing journey you have been on...Thanks for the post on the H1N1 too...our ped is urging me to get it for my little ones and I just didnt' know enough facts, so it was nice to see some written on your blog...I think our doctor has only recieved the nasal form and Brayden isn't old enough to recieve that type, so we will see in a few weeks when the shot comes in...

wow. The line about the doctor of gloom and doom telling you it was a miracle gave me goosebumps. Wow. 13 hours on the machine is long. Carly has been through a lot. I am glad to that you were able to touch her and rub her head and sing to her. I am sure that helped give her strength.

Thanks for sharing the story. ps. I tagged you in the name game. Ignore it if you have already done it.:)

Gosh Carly has been through so much and naturally in turn so have you. Well I always believe that everything is eventually determoined by a higher up, we can all do out bit including the doctors. Carly is meant to be with you and she is truelly a fighter and to add to it she has a wonderful mother who fights along with her. So happy that the difficult days are in the past and Carly is able to enjoy her life like all children should. I think she is incredible

That would have been scary! Scary doesn't even begin to cover it- I'm sure. So glad everything turned out just fine for her.

Wow - I can't even imagine going through something so scary. I'm so glad for that miracle - that Carly was healed and that she is with you today!

Thanks for sharing this story!

Wow...what a journey, with an awesome end!

Love that the doctor saw it as a miracle too, that doesn't often happen. Thankful you have your precious girls :)