It's been a busy weekend around here. I did tons of laundry on Friday and Saturday. Trying to get everything squared away to send Ashleigh back to Kalamazoo. We packed. Did more laundry. Packed some more...tiring!

Saturday, Ashleigh, Carly and I went shopping. Ashleigh needed some last minute things to take to her apartment. We made it fun though. We also went to Panera Bread for lunch. Their soup and sandwich deal is so yummy! Expensive, but yummy! It was the perfect day for soup too. We had some really chilly weather up this way over the weekend.

Sunday we were up and at'em early. Ashleigh needed to get her tiny little Chevy Cavalier packed with TONS of things. After it was packed (I should have taken a picture) there was just enough room for her to sit. It was packed tight and full. I did manage to take a couple of pictures of the girls saying goodbye.

After I snapped a few pictures, it was off to Sesame Street Live for Paul, Carly and me. Carly was a little upset that "sissy" wasn't going with us. At that point, Ashleigh was still doing some last minute things before taking off. Poor Carly left home with Ashleigh here, but returned to no "sissy".

Carly was a bit unsure when the show first started. She kept saying she wanted to go home. Paul and I were a little worried that this was not going to work. We kept talking to her and trying to get her 'into' the show. Finally, she was mesmerized. She couldn't take her eyes off the stage.

The show was great! We had great seats. We sat directly in front of the stage. 4th row, smack dab in the middle. I took several pictures, but have to edit them first. Then I'll share!

By the time intermission came. Half way through the show. Carly was begging, "more, more, more"! At the end of the show, they did a parade. Carly LOVES parades. Of course, she wanted "more, more, more"! Sadly, the parade was the Grand Finale. We left the show and Carly was in a great mood. She thankfully, made it through the show and was quite happy watching all of her Sesame Street friends sing and dance on stage.

I'm busy working on my Menu plan for this week and next. I'll share when I get it all jotted down on paper :o) ! It worked so well the last couple of weeks. I did change it up a couple of times. Once, Paul was sick and wanted soup and grilled cheese, so that took the place of one meal.

For now, I leave you with the girls, saying goodbye. 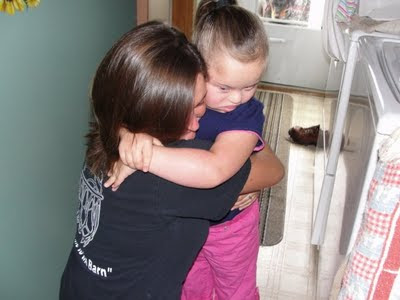 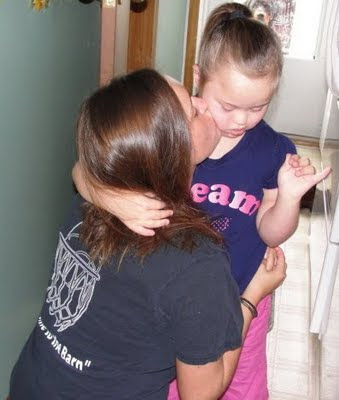 Posted by Unknown at 9:22 AM
Labels: Ashleigh, Carly, Fun stuff, having fun

Very cute pictures. What an adjustment for Carly to make.

What great sisters! I love the pictures. I imagine it must have been so hard for Carly to say goodbye.

It sounds like she had a great time at Seasame Street Live - what a great show!!

Sweet sisters! My Dh grew up in Kalamazoo!

Sorry to hear about that terrible dentist's office. That's horrible! I'd suggest that you start to "play" dentist for a while to see how Carly does--if she's the dentist, you might learn more about how she was treated, and also she might work out some of her fears. I've found that if I give my child some power over the situation they usually rebound pretty well. Another idea is to have her come with you to your dentist appointments, so she can see exactly what goes on.

We've had good pediatric dentists, and others that weren't so good (we move a lot). Right now, we just take Hannah to our regular family dentist and it works out fine, even with her pre-med.

Hope the new dentist will be a good match for Carly.